The striking and memorable events of last week will be imprinted on my brain for many years to come. While driving through California's Central Valley, I was hit unexpectedly by a dust storm in which visibility was down to five feet in some areas. Trying to avoid stopped cars in front of us, getting rear ended, and oncoming traffic, was more terrifying than any snow storm I've driven in (see Facebook post from October 14 for additional pictures). One image in particular that will remain with me was the sight of a black Labrador retriever laying next to a barbwire fence on the bare ground that had lost his life due to the hazy conditions. In light of this storm, I've decided to refresh your memory about the Dust Bowl, introduce erosion, and give you some additional information about current trends toward repeating this horrific time in history in California and beyond. 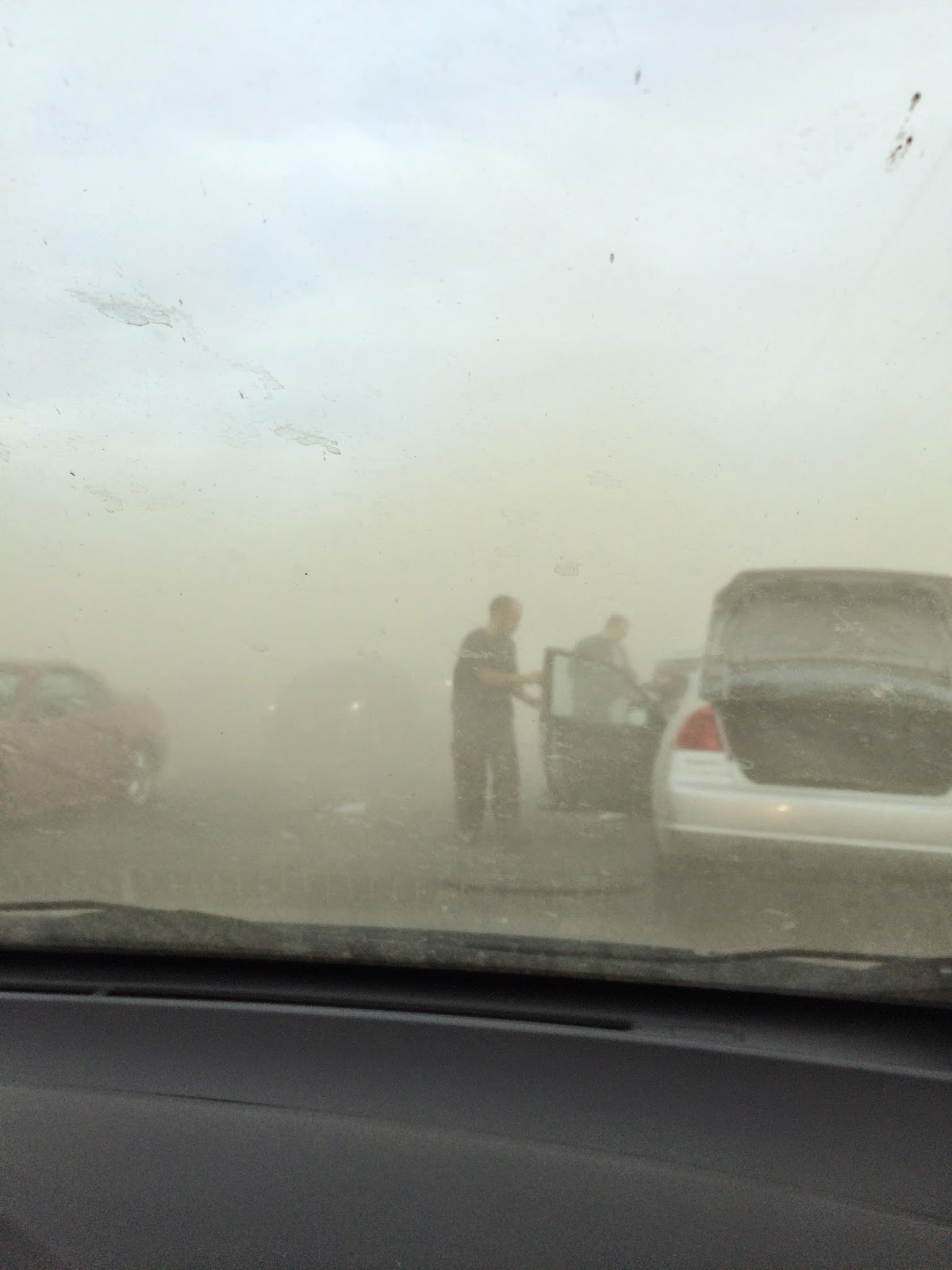 G. Rey assisting with accident in front of us.

The Dust Bowl. Last time you may have heard about this was your high school history class when discussing the Great Depression. This greatest environmental disaster in US history resulted from the combination of a decade long drought starting in 1931, poor ranching and cultivation practices, and an increase in farmland. These factors worked together to create the perfect conditions for vast amounts of soil erosion via wind. 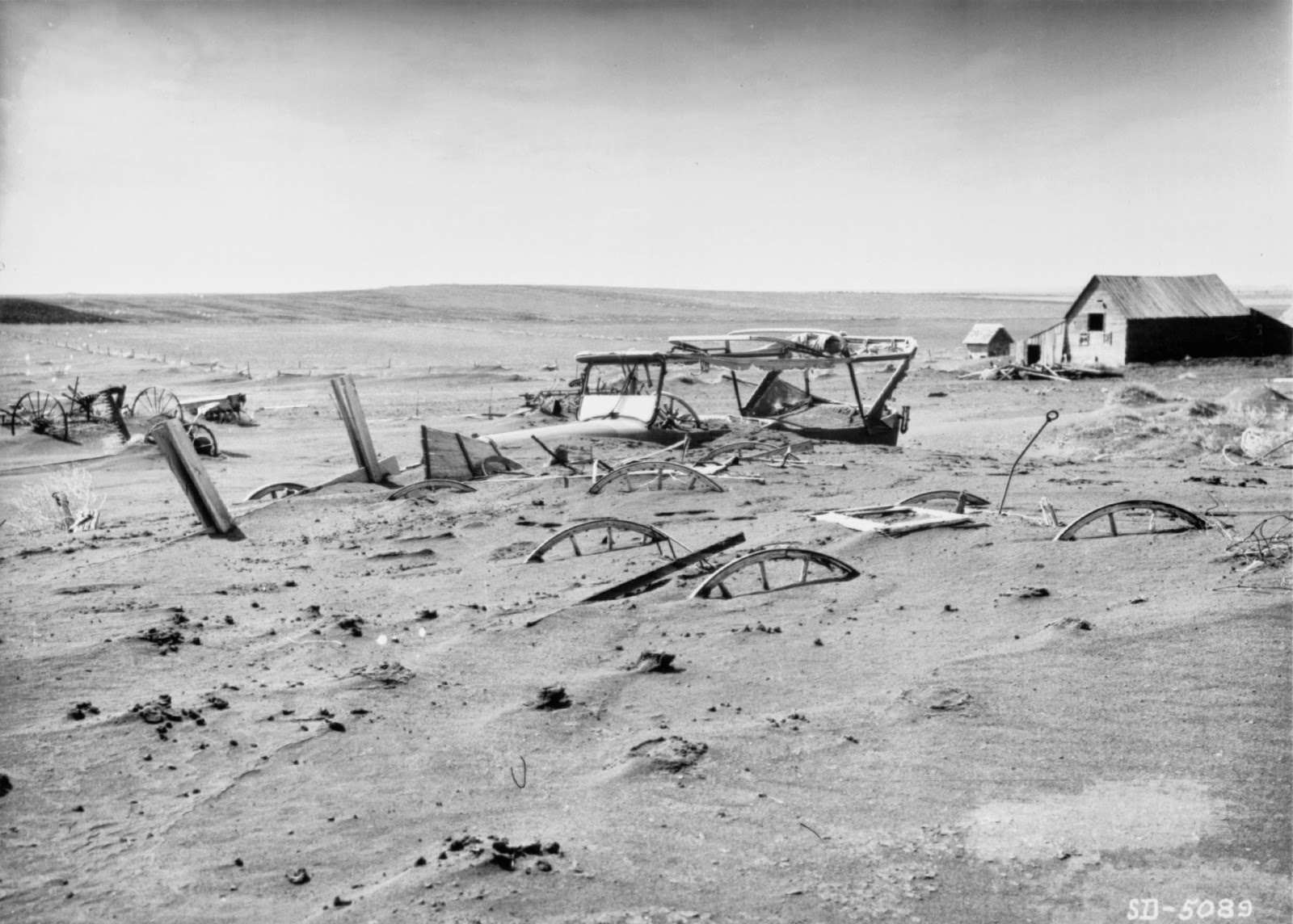 The panhandle of Oklahoma, northern Texas, northeast New Mexico, southeast Colorado, and southwest Kansas experienced the most intense erosion during the Dust Bowl Era. The drought during this time contributed to the failing crops and exposed soil, but let's back up just a tick and look at what was going on prior to the 1930's. The Great Plains are known for having fertile grasslands. This allowed ranchers to provide abundant feed for their stock. However, as with any resource overuse will degrade and diminish it. Overgrazing decreased these bunch grasses found on the plains. Bunch grasses are perennial meaning they continue to grow from year to year and can build up extensive root systems. The root systems act as a glue to hold the soil together. Decreasing the population of these grasses increases the chance of soil escaping via erosion. With the decrease in grasses, the grazing land was converted into farmland. Wheat dominated this area. With plenty of precipitation during the 1920's more and more folks were attracted to farming and more land converted (losing those extensive root systems holding the soil together). When the drought of the 1930's hit loss of crops and the absence of drought tolerant plants to hold the soil together combined with winds resulted mass transport of soil. 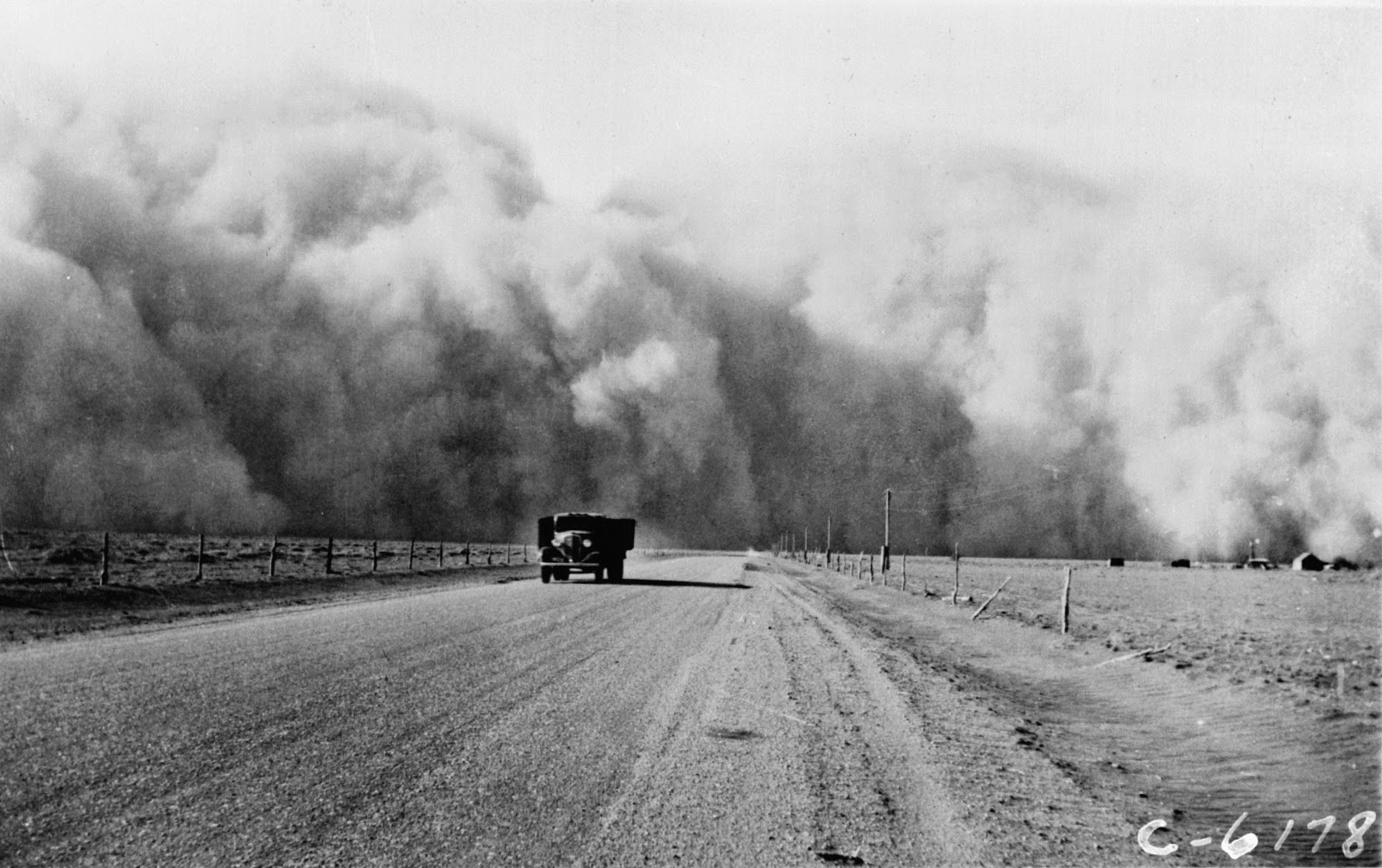 So how did we find our way out of this mess? Mother nature helped with the return of rain in 1939. However, before this there were measures taken to reduce the effects and help prevent future disasters such as this. The Soil Erosion Service was established in 1933 and the concept of "soil conservation" began to spread across the country. Protecting the soil and preserving fertility became the main message touted by the agency via the director, Hugh Hammond Bennett. During the 1920's Bennett had already begun to talk about erosion in his publications, including "Soil Erosion: A National Menance," which is considered his most influential writing. In addition to the Soil Erosion Service was the establishment of soil erosion experiment stations as well as soil and water conservation districts.

Today's focus by the NRCS has continued this line of thinking. Soil health is at the forefront of their message - http://www.nrcs.usda.gov/wps/portal/nrcs/main/national/soils/health/
for farmers and ranchers. Various adjustments to these practices such as cover cropping, short-rotation grazing, less intense tillage can help to improve soil conditions. Changing up practices can be complicated and sometimes costly in the short-run, but without evolution in how we grow food, fuel, and clothing the soil will essentially turn on us. This was made apparent by driving through the Central Valley of California where farmers struggle with lack of water from drought and reductions in government allocation of irrigation water. It is a complex situation in which everyone and no one is to blame. What is most important is figuring out way out of this one by using what we know from history and the tools at our disposal. This applies to California as well as other states in the US and beyond our borders. A colleague in South Africa passed a long the photo below of similar issues they are having with soil erosion due to drought and past cultivation practices. 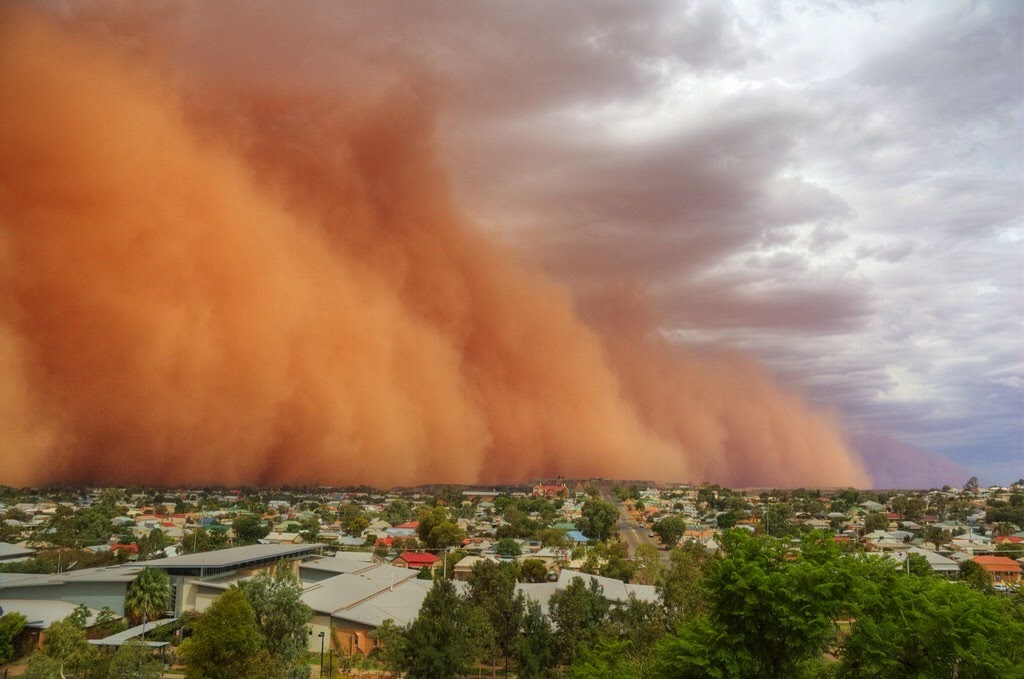 Some thoughts to leave you with by Secretary of Agriculture Henry Wallace in 1936:


"The nation that destroys its soil destroys itself. The soil is indespensible. Heedless wastage of wealth which nature has stored in the soil cannot long continue without the effects being felt by every member of the society...Wind and water are seldom harmful when the natural environment is undisturbed. But, when soil resources are used unwisely, wind and water write a tragic story in dust storms and muddy rivers that carry good soil to the ocean."


Posted by Talus Soil Consulting at 12:04 PM No comments:

I'll take an order of the Andisol, please.

To understand and characterize soils better United States soil taxonomists (those who define and name) came up with a a system that divides soils by various distinct and unique features. Soils in their broadest sense are grouped into divisions called orders. There are twelve soil orders in the USDA system of naming (yes, different countries and organizations have different ways of naming soils, just to make life more interesting!). In alphabetical order they are as follows:

Photo credit USDA NRCS - http://www.nrcs.usda.gov/wps/portal/nrcs/detail/soils/edu/?cid=nrcs142p2_053588.
This poster can be downloaded or purchased from this link.

Since the Japanese volcano, Mt. Ontake, erupted just recently, I thought it would be appropriate to begin with andisols! Soil orders are grouped by their major diagnostic horizons (layers within the soil that have specific characteristics), minerology (minerals present in the soil), soil moisture and temperature regimes. Andisols are unique in that they typically form from volcanic materials (ash or tephra, pumice, lava, and cinders) which have a very different type of mineralogy than other soils types. I'll forgo a long-winded discussion about this, but you may have seen volcanic glass (e.g. obsidian) and noticed how it doesn't look like a typical rock. As this glassy material weathers (breaks down) it creates a soil - an Andisol. The rocks int the volcanic explosions (tephra) also contribute to these soils. 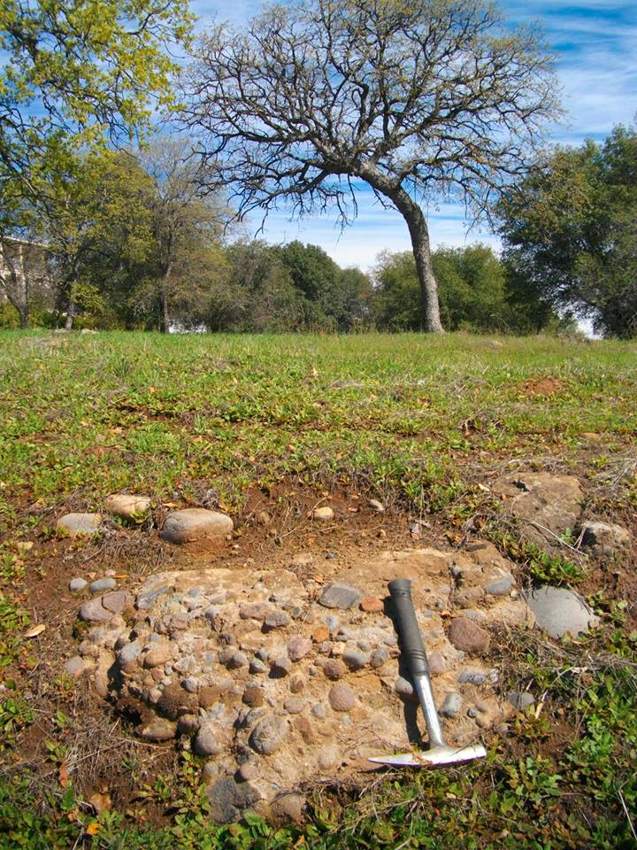 Soil with volanic deposits that many many years from now could turn into an Andisol.
Photo Credit: D. Beaudette USDA-NRCS. 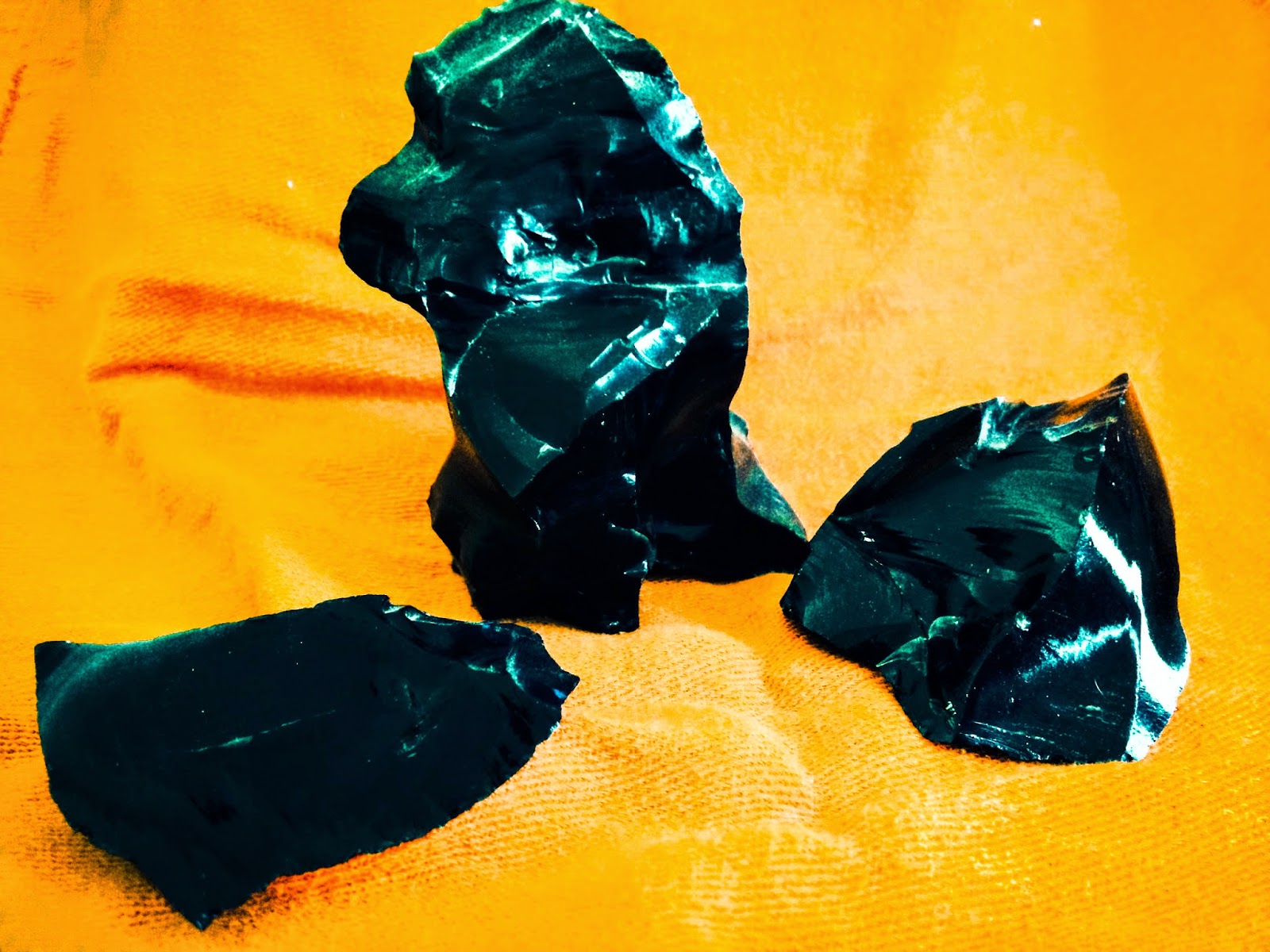 
The complex mineralogy (glassy and rocky materials) in these soils allow for high fertility (lots of nutrients for plants). However, in cooler climates, many of the andisols are on steep slopes this high fertility is limited to production of forests. For anyone who has visited the Pacific Northwest's Cascade Mountains, you have seen these soils in action.  Some of the great trees in these areas can attribute their size these soils. In warmer climates these soils are used for agriculture. However, a draw back of this soil is it's capacity to "fix" phosphorus making it unavailable to plants. Additions of more phosphorus fertilizer often do not help either. This would be similar to buying flour at the store, bringing it home, and placing it on a high shelf in your kitchen, and then throwing away the step-stool you used to place it there. You have flour to make cookies, but cannot access it (lets just pretend you have no other chairs and cannot climb on the counters to get at it). You go to the store and buy more flour, come home and place it on the high shelf again removing the step stool once again. Continue this process over and over and you will begin to understand this issue with phosphorus fertilization in andisols. Some creative solutions have been approached, such as soaking potato tubers in a phosphate solution prior to planting so that they have access to phosphorus.

Because andisols occur in many different climates the resulting soils can look very different. Below is the distribution in the United States and a few examples.

Interested in the major soil order near you?
Post the location in the comments and I'll address
it the next time I blog on soil orders!
Posted by Talus Soil Consulting at 3:22 PM No comments: