The United Nations has declared 2015 the International Year of Soils (IYS)! This year soil professionals and enthusiasts alike have come together to educate the world on the importance of soil for food and critical ecosystem functions. By raising awareness about this resource we hope to increase understanding of this subterranean world that we often taken for granted. 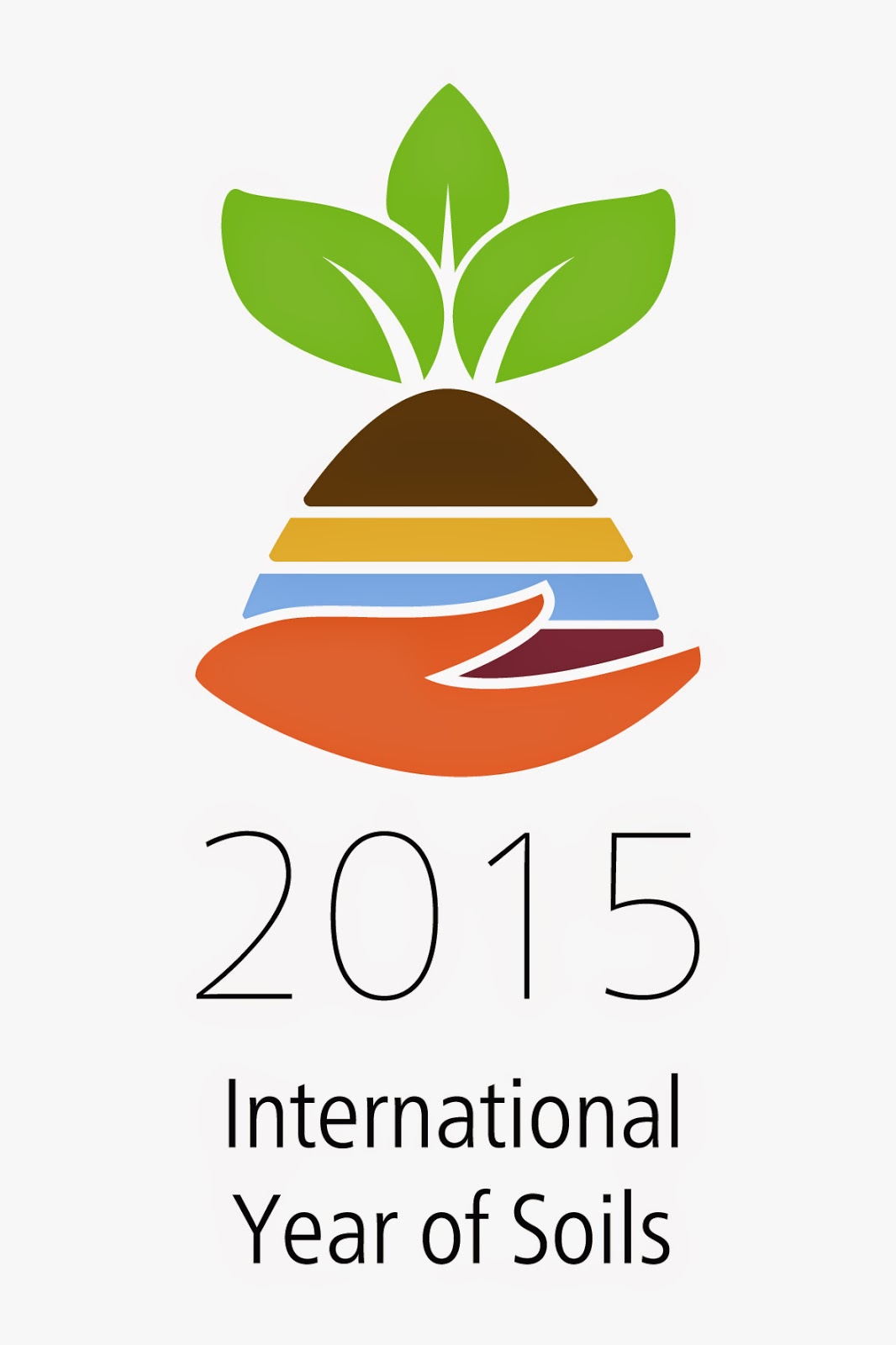 Monthly themes have been designated to narrow the focus and provide greater insight to various areas of soil science. To kick off the IYS, "Soils Sustain Life" was selected for January. To give you a taste of how locally and abroad soils sustain life I have solicited assistance from a colleague from across the globe to help me with this post! We'll begin in my backyard of California, USA.

California contains ecological wonders and unique crops that are supported by its favorable climatic conditions and diverse soils. Soils sustain life in California through plant production of building materials for housing, textiles for clothing, and wide variety of fruits, vegetables, and nuts to enjoy as well as meat and dairy products. Agricultural production in California is competitive with many countries in the world!

Soil supports the growth of some of the largest plants in the world. California contains coastal redwood trees, one of these amazing organisms prized for both the majestic beauty as well as a building material. The Giant Sequoia (shown below), commonly found inland in the Sierra Nevada Mountains of California does not grow as tall as the redwood, but is known for its wide base (diameter) and longer life-span. 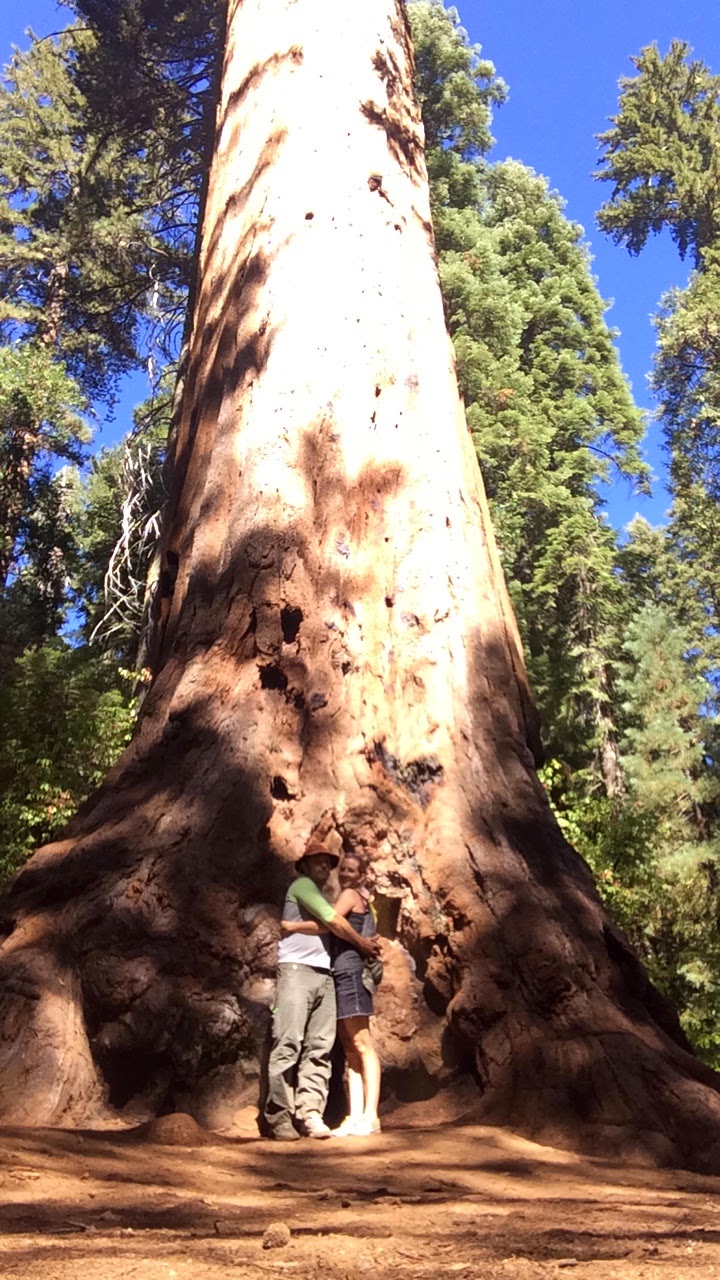 Unique crops such as artichokes are grown and harvested along the Central Coast. Castroville, California is known at the artichoke capital of the world. Deep fried artichokes are a must to try when visiting this area! 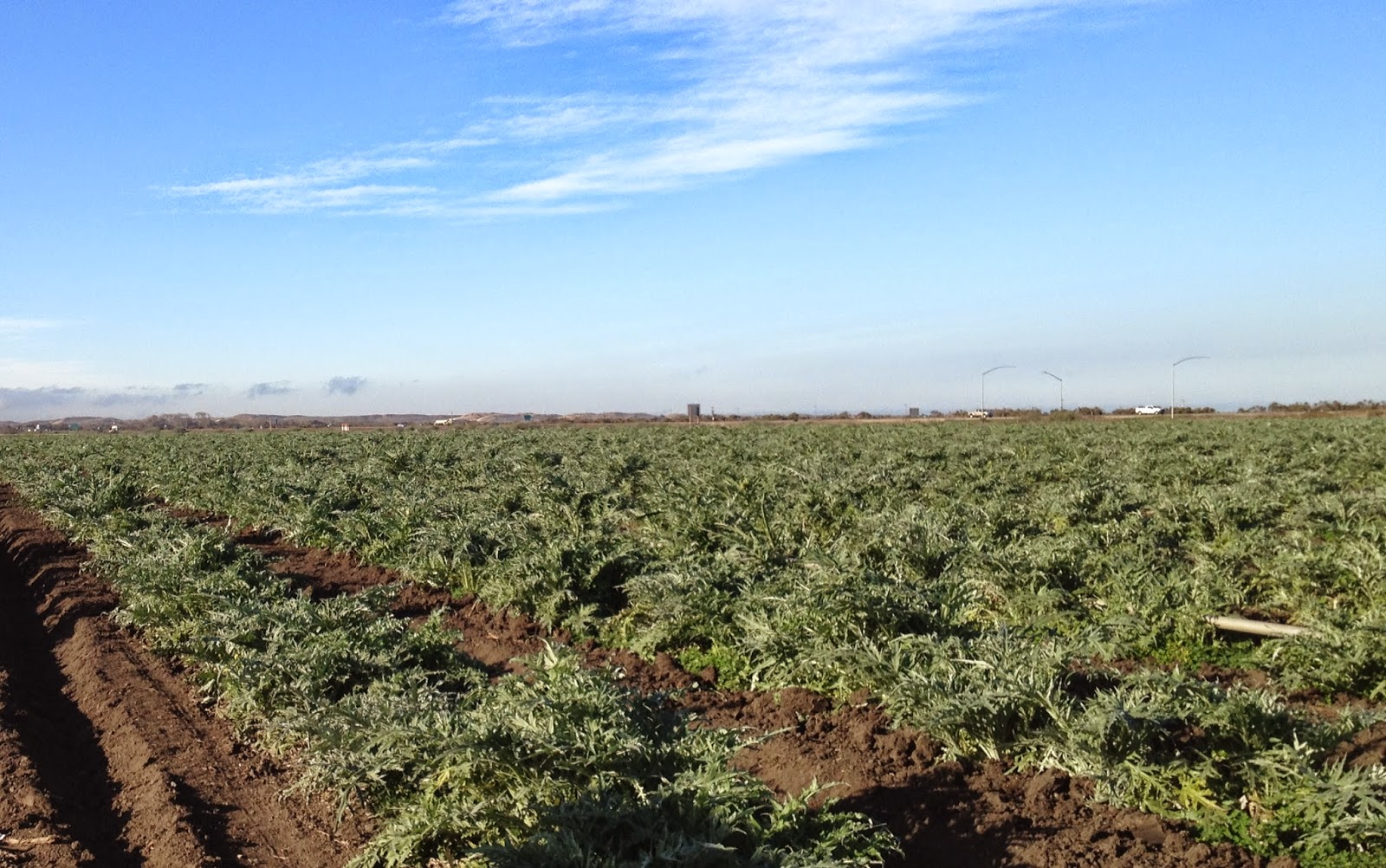 Soil provide feed and forage for beef and dairy farmers in California. The University of California Elkus Ranch provides an opportunity for kids of all ages to learn about ranching and the soils that support this industry. 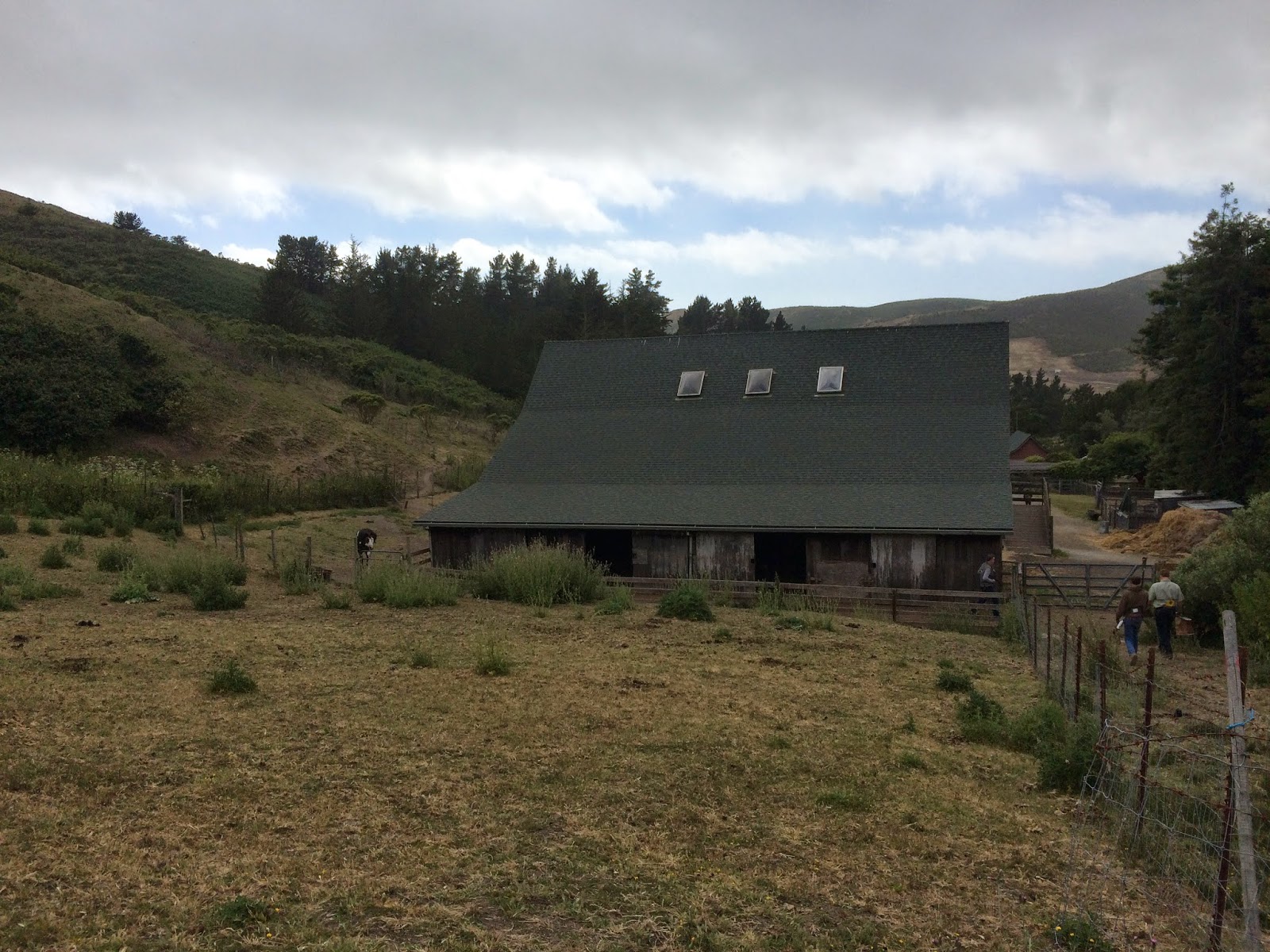 And now we travel around the world to see how soils sustain life for South Africans!

Thank you to Coenraad Frankel of Agrimotion in South Africa for his contribution of the following section to today's blog post!


South Africa is known for its diversity and mixture of cultures and flavours. That's why we call ourselves the rainbow nation. The soil under our feet is no different as it sustains our freedom, our heritage and our amazing landscapes.

From the outskirts of the Eastern Cape where Elizabeth Xginga raises her 5 children using the small land area available to her to grow root vegetables such as cassava... 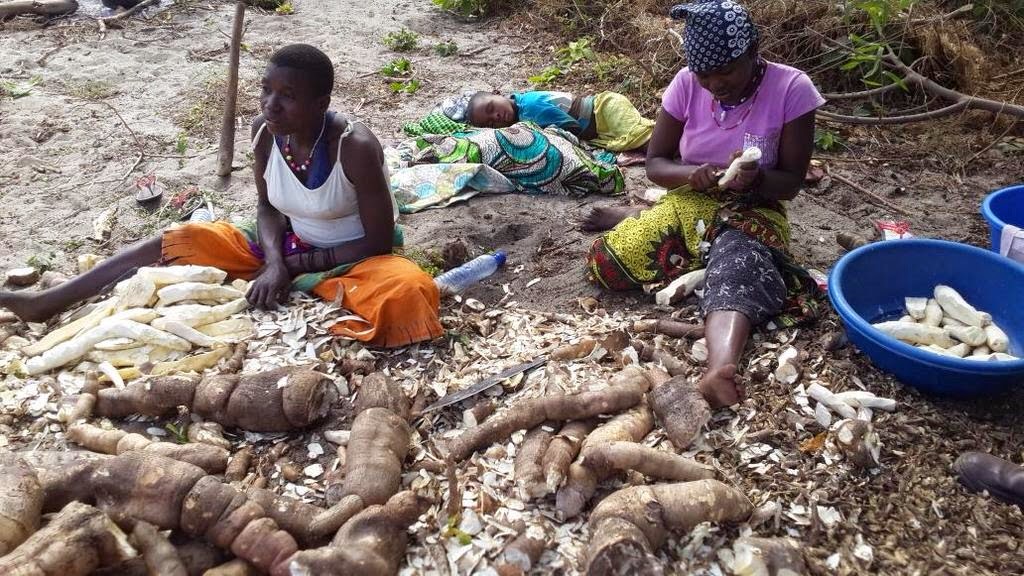 ...to the Northern part of Limpopo where our wildlife is sustained by the diverse habitat they call home... 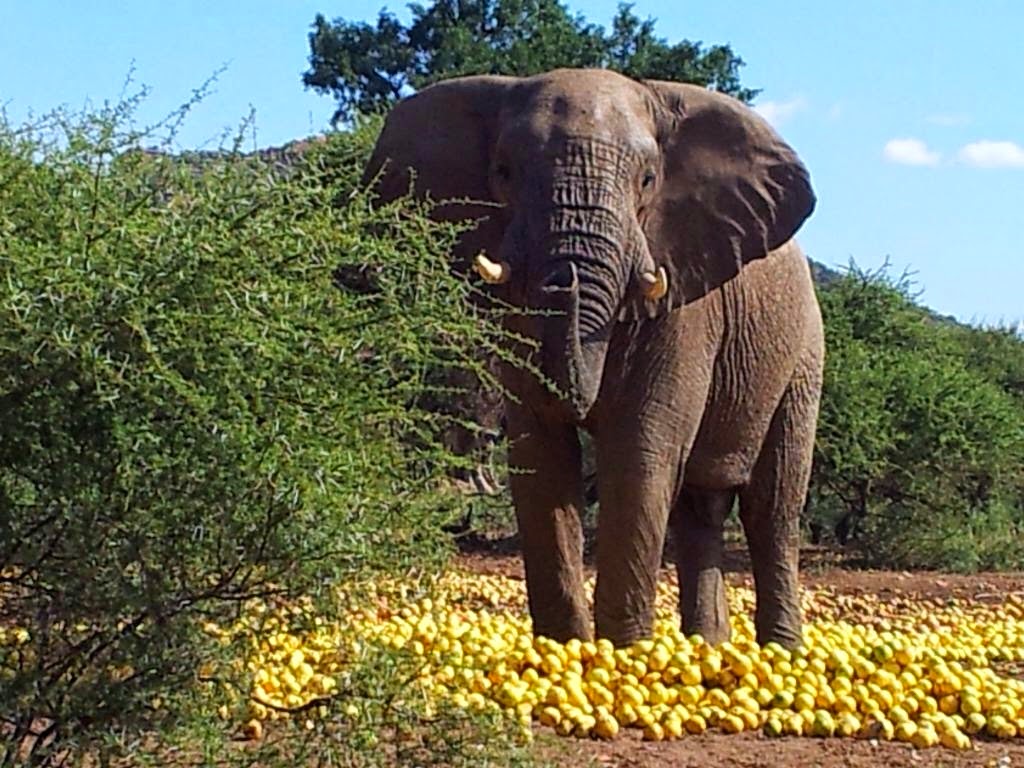 And the apple orchards of the Boland... 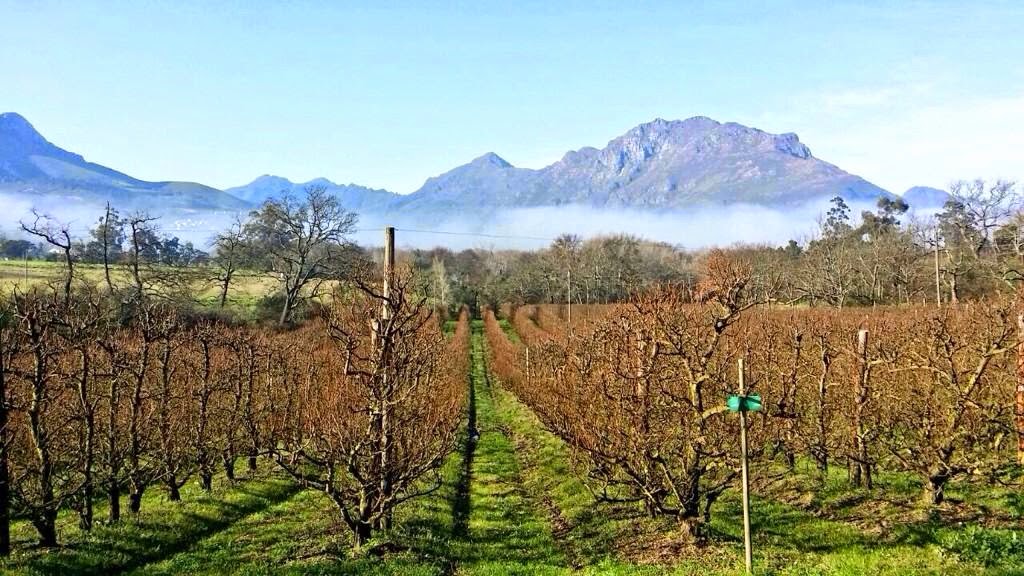 ...soil plays a critical part in its sustainability. Without it this rainbow nation we call home would not be the same and the possibility of a bright future for this great nation would be less colourful. We celebrate the year of soils on the African continent by remembering what makes it all possible - the soil under our feet!!
Across the world soils sustain life. From the largest organisms in California and South Africa to the unique crops grown in these areas, soil is a resource that must be protected, managed, and celebrated in such a way that we help to in turn sustain it.

To learn more about IYS and monthly themes: https://www.soils.org/iys/monthly-videos


Posted by Talus Soil Consulting at 9:58 AM No comments:

With the rain last month, there was some extra time to catch up on movie watching. One of my choices was the third movie in the Mad Max series - Mad Max Beyond the Thunderdome. For those of you unfamiliar with this series, the premise is survival in a post-apocalyptic Australia. The story follows main character Mad Max Rockatansky (Mel Gibson - when he was still hunky and had not departed on the crazy train) and his adventures in this new world. Ok, so what does this have to do with soil? Other than the miles of barren wasteland that is shown, there is a particular occurrence in this third movie that I felt necessary to investigate. When Max is banished from Bartertown into the desert by Aunty Entity (Tina Turner - she plays a bad ass in this movie!), he roams the desert on his horse. Eventually the horse gets way too darn tired and collapses. Some how the horse has found quicksand and is unfortunately swallowed up by this desert feature. Many questions may come to mind at this: Are quicksand pits real? How does quicksand work? Can they be escaped? And so we have come to the soil topic for this blog post and the beginning of a multi-part series focusing on soil movie myths! 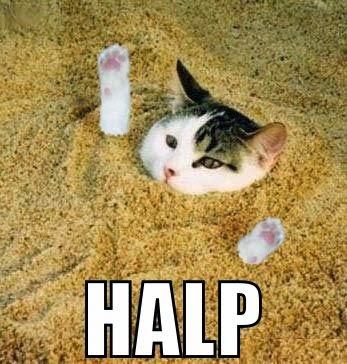 To answer the first question, yes, quicksand does exist.

To answer the how does quicksand work, we have to back up a step. There are two types of quicksand - wet and dry.

Wet quicksand has been witnessed all over the world. These pits are comprised of sand, silt, clay, and water (fresh or salt). The particles are loose (low bulk density) and saturated with water, but appear solid to someone at the surface. When a rapid change in pressure (someone walking along and stepping on the quicksand) is exerted on the soil/water mixture, liquefaction occurs! Liquefaction happens due to loss of strength between the soil particles. Typically there are what are known as "force chains" or the compression of particles held together by multiple forces. These force chains help distribute the weight of an object that comes in contact with the particles. However, when the soil is filled with water (saturated) and the pressure of the water inside the pores is suddenly greater than the contact stress between the soil particles it will  push them apart (i.e. the friction between particles is reduced, so no more force chains). In other words the viscosity (resistance to flow) of the mixture decreases and this allows for someone walking along to suddenly sink into the quicksand! The particles have then moved around and are separated into water and sand. The soil particles are now compacted around the person leaving them submerged and stuck. Because of this separation, after liquefaction, the viscosity increases again increased which makes getting out of quicksand very difficult. 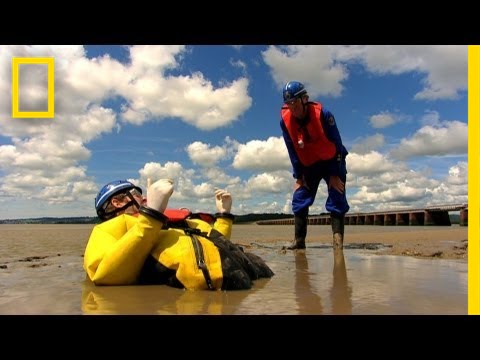 Is it possible to get out of a quicksand pit? Well, Bear Grylls can apparently escape one, so you can too! Sinking completely in wet quicksand has been shown to be nearly impossible. This is due to the buoyancy of humans versus quicksand. Humans are half as dense as typical quicksand, so likely you will only sink to your waste. Typically people caught in quicksand die from heat stroke and/or dehydration (inland) or drowning at high tide (near the sea), but not from asphyxiation in the pit itself. That being said, the force required to remove yourself from a quicksand pit is equal to that of lifting a small car. Although you have been told that struggling will just cause you to sink, no movement will not get you out of the pit either. Some movement is required to allow water back in between the soil particles. Slow and small actions are necessary to remove yourself from the pit. Several examples are demonstrated in the links below. 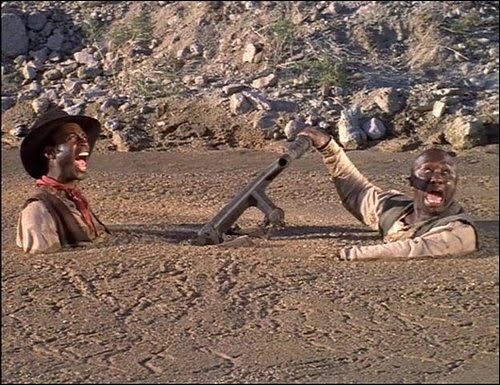 See the following link for Bear's battle with a wet quicksand pit. There is an almost NSFW ending when he tries to remove the sand from his clothing to prevent chaffing: Bear Grylls vs. Quicksand. National Geographic has a slightly more elaborate approach to free oneself with a bit more dramatic music! Click here for their version: Nat Geo Quicksand Rescue.  A nice visual representation of how to get out of quicksand and avoiding quicksand in the first place can be found here: Quicksand Avoidance & Escape. In summary, staying calm, laying back on the sand surface, and getting your legs up appear to help you get out of this sticky situation. However, all of these address wet quicksand. For dry quicksand, it looks like we will have to refer to Hollywood and the famous escapes portrayed in the movies.

Posted by Talus Soil Consulting at 8:32 AM No comments: